The Guardian (28/6/2017) shows an article with the title “A Million Bottles a Minute”- I suggest you read for yourself:  https://www.theguardian.com/environment/2017/jun/28/a-million-a-minute-worlds-plastic-bottle-binge-as-dangerous-as-climate-change?CMP=share_btn_tw

The global consumption is estimated to reach half a trillion bottles by 2021. By now we all know that many of those bottles reach the sea. Others are dumped on land. And it is not only bottles.  Most of what we buy is wrapped in plastic. Scientists are step by step learning that whether on land or in the sea plastic does not really decompose – it is not, like for example leaves from the trees – converted chemically by organic processes into basic components that loop back into biological life processes. Instead plastic is split up into ever finer particles that eventually become small enough to penetrate living cells and influence the very life processes of plants and of the animals that eat them. It now seems clear that plastic particles are found for example in fish that we eat – how that effects us has become a serious concern. Scientists are not clear on that. There is reason to worry since the use of plastic grows steadily, and since collection and recycling is far from enough to have an impact. It has been estimated that globally in 2016 only 7% of the plastic bottles were recycled, while the rest was dumped in landfills or in the sea.

The islands outside Jakarta are a popular destination among domestic tourists in particular, but also among foreigners, since it only takes a few hours to reach them by speed boat, and since the beaches are friendly. The visitors generate garbage, but most of what is found on the beaches is from elsewhere and has been washed up by the sea. Resort operators are anxious to keep their places neat and clean – of course to attract more visitors. So you may not notice at first. But as soon as you leave the resorts you will find garbage in droves. 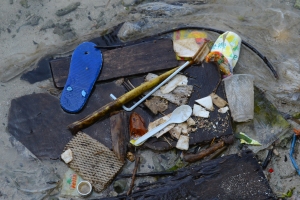 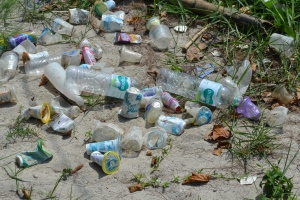 You will find piles of plastic among the trees inland also, dumped since there was no other east way to get rid of it.

The Governor of Jakarta has mobilised an “Orange Brigade” to collect and dispose of garbage, and this work is extended to the islands off Jakarta as well. Brigade workers collect garbage – almost entirely plastic – and the volumes are barged once or twice a week to the mainland for dumping in landfills. 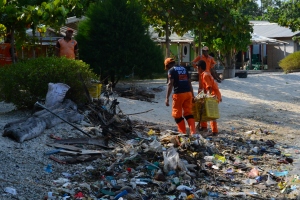 Field trips arranged by Naturetrails include visits to villages in rural areas, and Homestay wherever feasible, where we not only can see the situation for ourselves but engage with families and village leadership to improve the situation. As visitors we have to set examples by not leaving garbage behind. But we can also participate in “clean-up operations” with our hosts, and perhaps provide advice on how to improve garbage management.  We can provide garbage cans and suggest collection routines where justified. In remote areas recycling is usually uneconomical unless well organised with support from the district government. Our role there is to demonstrate the importance to tourism of a clean environment.